Remembering What I Have Been Through

As I write this, the Paralympic games have started in Japan. There has been much talk about mental health, which is great to see. Athletes having the strength to open up about what we don’t see. I remember watching Wimbledon this year, something I have watched every year since 1975. A sport that I love and that I compete at in the transplant games. 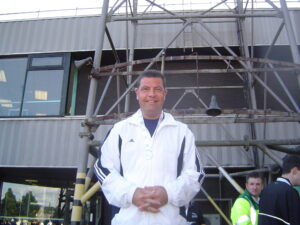 But listening to Naomi Osaka in the main games, I found myself challenging my own view about tennis. Was I so blinkered by my love of the sport, I was somehow ignoring the players and their feelings. I just love sport, but I never considered the mental health of the athletes and realise I was wrong to do that. Having to face the questions from the media and having your performance picked apart, was something I never considered.

The more I thought about it, the more it made sense. I have always known the mental side of tennis, having lost many finals myself. Now let me be clear I am not trying to suggest my level is elite in anyway. However, what it did was make me stop and think what elite athletes go through. The pressure at such a young age must be so intense. As sports fans we are so focused on the games, the match, or whatever sport we are watching. Now I suspect it has made many of us stop and think about not just sport, but about mental health far more as well.

Talking and opening up about your mental health, is certainly something I found very therapeutic. Now I have to stop myself from offloading too much, which kind of makes me chuckle in many ways. It’s as though my head was a pressure cooker waiting to let off steam. Now the door has been opened, I just want to let all the steam come out. I also want to help others, as I now have a better understanding of mental health. I was a closed book for many years. A kind of imaginary wall was something I would put up, to shield me from hurt. Looking back I knew what I had been through and faced as a kidney patient. What I had faced in my family and as a parent. I guess what I am trying to say, is that it is all kind of making sense to me now.

The more I think about it, the more I am surprised it never happened before. There is only so much we can take as people, we absorb so much as if it’s not one thing, it’s something else. I am finding that far more now as an older man. Not only is the kidney failure a condition all on it’s own. Now as well as the mental health, there is arthritis to think about in my 50’s. Al of that combined has an effect on your all round health and wellbeing.

I find much of it is all linked in with our feelings. The kidney function with my transplant is great and I just stick with the same routine, day after day pretty much. But then the arthritis will kick in on some days, the cold getting to my knees. Standing up and my legs creaking and clicking as I do so. That in itself gets you down, which of course has a knock on effect on the mental health. Everything is relative and has a knock on effect, on work and on the pastimes we enjoy. In my case tennis, I have not played for nearly 4 years now. I used to play for 5 hours some days, it kept me active and helped my all round health.  I have missed the transplant games as well. Chasing medals and competing, showing the benefits of organ donation.

My mental health stopped me from doing what I enjoy, I turned to food as a comfort. Then the arthritis and pain that comes with it, also made me less active. Then of course the inevitable weight gain happens and it becomes like a merry go round, with no happy ending. I understand that far better now and learning to deal with it all far better. The weight is coming off and I am feeling much better for it. I used to get really down about not being able to compete anymore. The reflection in the mirror trying on some new t shirts was not the same. But the difference now is that I am accepting that my wellbeing comes first. It’s ok to have a down day and feel a bit rubbish, it’s normal to feel like that.

You never stop learning and of course you don’t always get it right. That is ok too, because it’s ok to make mistakes and be honest about it. The same as it’s ok to have a difference of opinion, different views. It’s as if we are all being told to think in a certain way, you must be positive, stop being so negative. I am reminded of a picture I saw about toxic positivity, it made so much sense to me. How many times have we heard some of these phrases? Many are now surrounding themselves with people that tell each other what they want to hear. All agreeing with each other, in public at least, giving this perception that everything is positive. That will have consequences for society, as well as for kidney patients in my view. Over the years I have lost count at how many reports I have seen, where the findings are the same. Patients feel left out, abandoned, not listened too.

If we don’t listen, or keep making the same mistakes, how is anything going to change? Are we listening to patients on mental health, has the pandemic made you sit up and realise, we need to do more? It’s about listening to all views, even those you disagree with. Then everyone can learn more to help each other on mental health and much more.